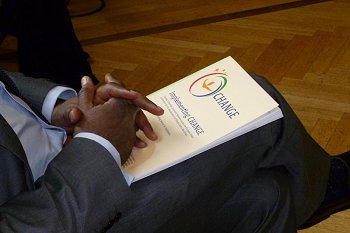 Training Manual of the CHANGE Project. Foto: © TERRE DES FEMMESOn the 28th of January 2015, just a few days before the International Zero Tolerance for FGM Day, the final conference of the pilot Project CHANGE took place at the Representative of the European Commission in Berlin. Almost 100 participants from various EU Member States gathered in order to follow the speeches and engage in fruitful discussions delivered by the CHANGE Agents, CHANGE Project partners, governmental officials and FGM experts. Throughout the day, Deutsche Welle journalist Mirjam Gehrke was moderating.

Being greeted by TERRE DES FEMMES’ chief executive Christa Stolle as well as actress and TERRE DES FEMMES ambassador Nina Hoss, the participants were addressed by European Commission representative Dr. Daniela Bankier, who gave a short speech detailing the EU’s commitment on fighting FGM. The conference carried on with two panel discussions. The first panel comprised representatives of the project partners who shared achievements and outcomes of the two years of CHANGE: Linda Ederberg, TERRE DES FEMMES, Germany, Zahra Naleie, FSAN, Netherlands, Toks Okeniyi, FORWARD, UK and Fana Habteab, RISK, Sweden. The second panel session gave the word to the CHANGE Agents from the four partner countries, who reported from their experiences with their behaviour change activities and the challenges they faced when reaching out to community members in order to advocate for the abandonment of FGM. The CHANGE Agents were Marie Christine Hanne, Germany, Rebecka Goldschmidt, Sweden, Solomon Zewolde, United Kingdom and Ashwaaq Abdirahman, Netherlands.

Afterwards, Dr. Anja Stuckert from Plan International presented a methodological background on the theory of change and introduced to all participants the training manual that has been produced in order to promote and guide change in the communities. The gynecologist Dr. Christoph Zerm presented information on health aspects and the role of key professionals.

During the lunch break, a press conference was organized to inform the media about the CHANGE project and lessons learned.

In the afternoon, the conference spread into four roundtables, offering insight views by experts and the possibility to pose questions and engage into discussions. The four topics and their outcomes were as following:

The different forms of law and jurisdiction – e.g. human rights, religious and national laws - and the effectiveness of those laws were discussed. FGM poses many difficulties as it has a high underground risk as well as broad range of emotions playing into legal issues. Punishment should only be the last mean, thus, education should be strengthened. The reason for the legal abandonment of FGM was once again stressed by pointing out health issues, equality rights and human rights laws.

EU Commission and member states still do not have a thorough policy against FGM. According to the round table, effective measurements in order to step into action have not yet been achieved. Tools for local level use have to be created and implemented. Affected persons have to give a deeper insight in order for officials and institutions to take on actions. Nevertheless, UK can be seen as a role model, especially with regards of using data and media.

Other topics such as housing and violence against women must not get out of focus as well. Equally crucial is the role of men, who can and do take on decisive parts in talking and educating about FGM. Hence, the involvement of men and youth is essential, which is why the use of social media should be evolved. Additionally, the information circle, knowledge and training for key professionals has to be enhanced.

In order to evaluate and demonstrate the complex dynamic of social process and the fact that FGM is a social norm, the changes at individual level have to be complemented with information on the community level, which has to be documented. Additionally, FGM has to be seen in a broader context and approached on the community level with this in mind. Furthermore, the role of art and the emotional influence of FGM’s abandonment on individuals were discussed.

Subsequently to the summary of the round tables, German Federal Government Commissioner for Human Rights Policy and Humanitarian Aid Christoph Strässer held a speech on Germany’s approach to abolish FGM. His speech was supported by the one of Parliamentary Secretary of State to the Federal Ministry for Families, Senior Citizens, Women and Youth,Caren Marks. In her talk, she gave a prospect on provisions in Germany. Following the two speeches, Christian Papaleontiou of the UK Home Office provided a detailed insight into British policies and measures to end FGM.

We like to thank all contributors and participants for the cooperation and successful day.